Church of the Resurrection

“Through friendly worship for all, we aim to grow in Christ, in faith and in strength.”

Why is our Church so special?

In 1984, Bishop David Shepherd and Archbishop Derek Warlock, close friends with a common philosophy of “better together”, put forward a proposal for a shared church to be built on land originally designated for a Roman Catholic church. The project was discussed and approved by both congregations. The construction plans were drawn up and after much tough decision-making the foundation stone of the new joint church was laid in July 1988.

The decision was made to unite the names of the two churches into one: “The Church of the Resurrection and of St Bridget”. In September 1989 the building was opened with a Service of Dedication. A cross, donated by the Bishops, was placed on the wall behind the altar. An upper room was added to the building in the early 1990s.

In November 1995 Revd. Michael Mills departed for another parish and Revd. Steve Elstob succeeded him as Vicar in June 1996. steve departed in September 2007. Revd. Denise Williams joined us in 2008 until her retirement in January 2015.

Revd Tracey McLoughlin joined us in Feb 2016. She brought a new vision to the church and we saw our church grow in ways we never imagined! Including forming closer and stronger links with our Roman Catholics brothers and sisters at St Bridget’s.

Revd Tracey retired in 2022 but we still celebrate at Church on Sunday mornings at 9.30am. You are very welcome to join us.

We are back! We are open on Sundays for morning worship, from Easter Sunday.

Sunday morning worship is at 9.30am

What is the Church of the Resurrection?

A church is made up of people, it’s not the building. The video below is the first in a series highlighting some of the people who go to the Resurrection.

Church of the Resurrection 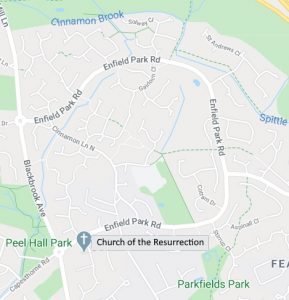 United Society – every person, every community, a full life

It's never easy asking for money. But we have bills to pay, just like everyone else. If you make a donation to us, rest assured that it will go towards keeping our church in the heart of our community. Thank you. Donate here

Church of the Resurrection takes its duty and obligation to protect all extremely seriously. We have adopted the national Church of England’s robust procedures and guidelines. You can find out more about the national policies and procedures at www.churchofengland.org/safeguarding

If you have any safeguarding concerns or issues on a safeguarding matter then you can find useful contact information at http://www.liverpool.anglican.org/safeguarding

Church of the Resurrection - Theme by Grace Themes